Over the years I've tried many diets from simple calorie counting to the more structured Weight Watchers™. I was most successful with Weight Watchers™ losing 30lbs in just six months, however keeping it off was a different tale and in the ensuing years I put it all back on plus a hell of a lot more.

No matter how hard I've tried since then I haven't been able to stick to any type of diet plan, people say things like 'you don't need to lose weight' and 'but you hardly eat anything anyway', they mean well but every time I look at my holiday photos there's this fat woman in them. No matter where I go, she's in all the photos. In some of them she pulls her belly in which results in a comedy image a la Barbara Windsor in an old Carry On film - I can see you smirking at the thought.

And then I heard about the Eat, Fast, Live Longer, The Fast Diet or the 5:2 diet. The premise is that you eat 'normally' for five days and then just consume 500 calories for the other two - not normally two consecutive days. I started almost three weeks ago and in the first two weeks lost 6lbs. I haven't struggled with hunger on the fast days which has surprised me hugely as I am a picker or a grazer - which is why it may appear to some that I don't eat much!

However, the reason I'm writing this is to share the best result so far while using this method. For the past six months I have had chronic knee pain, not helped with pain relief, physio, acupuncture or anything else. I am now pain free, I get a twinge now and again but nothing like the terrible pain that I was experiencing which was really getting me down. Apparently, when the body has no food to process it goes about doing a bit of DIY on its self, healing cells all over the place.

I know this option won't suit all people, but if you are curious then buy the book, it's by Michael Mosely and is half price almost everywhere at the moment! There are many variations on this diet and he covers them in the book - he also did a TV programme back in August about the plan - but recommends the 5:2 option. 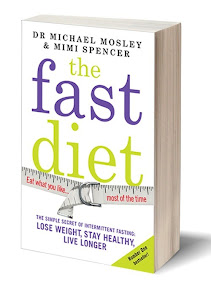