I feel I need to blog! And this post is something I never thought I'd write!
A few weeks back, I started to think about suggesting to John that we should get a dog to keep him company when he retires in a few weeks. Just thinking, you understand, I'd had the odd google for rescue dogs, but was disappointed that they were nearly all Staffordshire Bull Terriers. Not a breed I liked at all. I said nothing until last weekend when we were in Dunelm and I was trying to think what I wanted to buy. We were standing near all their pet stuff. John said 'a cat basket?' I said 'do you want a cat then?' 'I've seen one on the notice board at work and I thought about it' 'what about a dog?' 'really, a dog? But you've never wanted one!'
And so to today, after a week of looking longingly at lots of cute dogs online only to find they'd already been rehomed and my absolute resistance to a Staffy, we've committed to picking up a Staffy tomorrow. His name at the moment is Patch but we are going to rename him to Ben. He's approximately 2 1/2 yrs old and was taken as a stray. Rehomed in January only to be returned to the kennels in May. and since then nobody has shown any interest in him.
When we arrived we were warned that he would be bouncy when he came out and he was - for all of five minutes! After that he ignored us and sniffed his way around the ground.
We took him for a short walk, each of us taking it in turns (Matt & Amanda came with us, David was at work) to walk him on the lead. He walked well, constantly checking back to see if we were still there, obeyed instructions like 'sit', 'down', 'paw' and 'roll over' (which wasn't a good idea in the mud Matt!). We decided there and then that he was the dog for us and I still can't quite believe it!
So, to the pet superstore on the way home to by him a bed, a crate, food, collar, lead and toys in readiness for bringing him home tomorrow. He's in need of a bit of TLC and fattening up, he's been stressed in kennels but he is otherwise in excellent health.
And now the fun begins. John will have a loyal companion to keep him company when he retires and Ben will have a loving home - a forever home as the kennels call it.
I know most of you will have seen the pictures on Facebook and Twitter but here he is anyway. 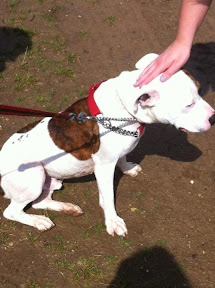