We decided to have a day out today with the prediction of a heat wave! John asked me where I wanted to go so I scratched my head and came up with a few ideas – and agreed that he could do a few caches as well, being the kind loving wifey that I am!

It didn’t even cross my mind to go looking for fabric shops – I think I’ve done enough of that kind of shopping to last me a few weeks so instead John researched some caches and drew up a circular route that would take us up the Suffolk coast and back home.

We jokingly said that we’d go out out at 7.30 and my body clock obviously took me seriously and woke me at 5.50 this morning. But we set off around 9.30 heading towards the first cache of the day in the middle of nowhere (sorry if I don’t sound enthused – I do try, just not very hard!) which was a church down a tiny lane in a small village called Theberton which I have to say I had never even heard of before today. After that we continued down very narrow lanes until we reached the perimeters of Minsmere nature reserve where he had another cache to do. After the successful discovery of the second cache of the day we headed off down the single track lane that led us to the car park and visitor centre to embark on our day out. I had no idea what to expect, we’re not into bird watching and nature particularly, but must admit to having a great time. Being close to the coast it was quite nippy with the breeze blowing off the sea and my hair decided to take a curl in the wrong direction but out of the wind it was very warm.

There are a couple of circular walks, each about a mile, around the reserve and we ambled around for a couple of hours, deafened by the sound of birds shrieking at each other birdsong, we even sat in hides like they do on Springwatch! Took loads of pics – sadly we don’t have much of an idea of what – and returned to the cafe for lunch and decided that, as we had enjoyed ourselves so much, we would have to return and actually signed up to become members of the RSPB!!

Without further ado I’ll leave you with some photos – all that fresh air and exercise has left me feeling exhausted! 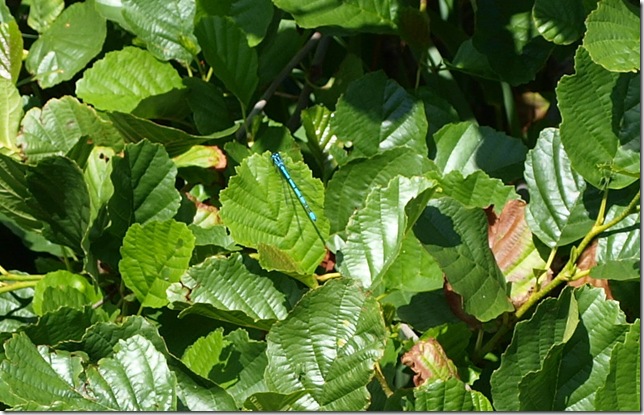 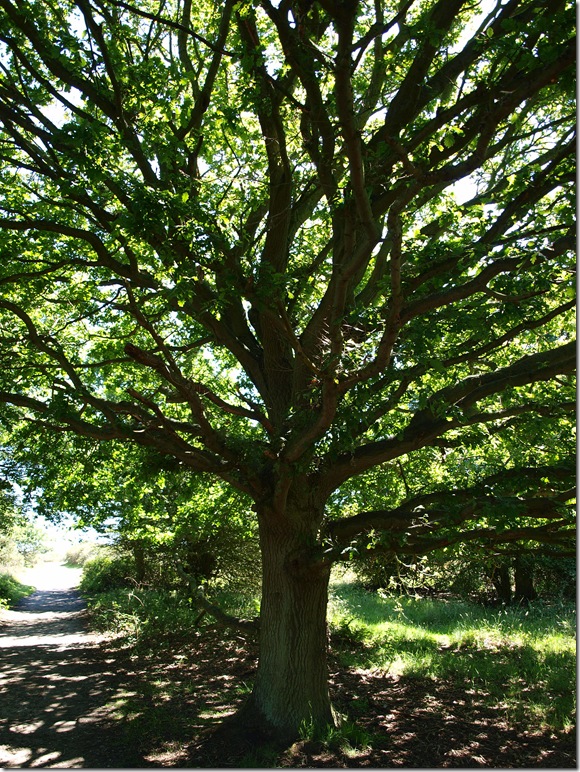 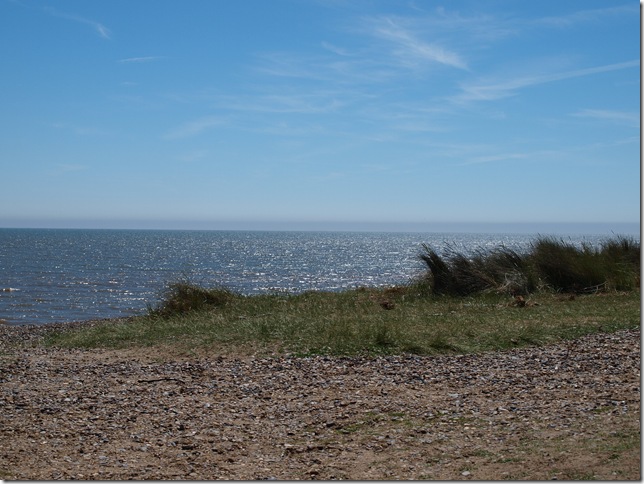 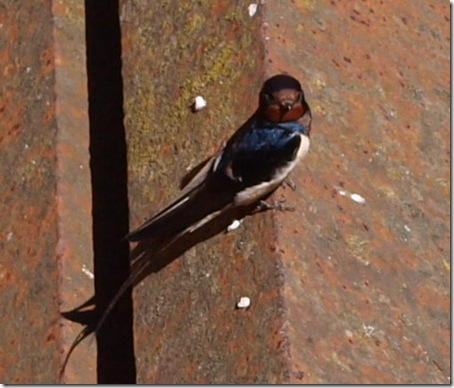 I wondered if this was a fledgling kingfisher – probably not though! 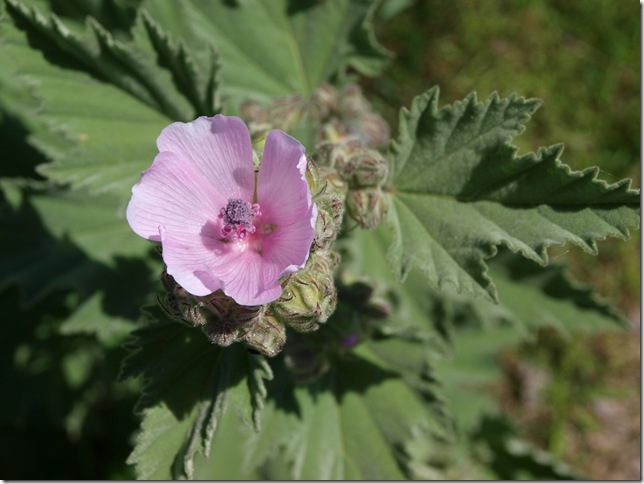 Can anybody tell me what the flower is?? 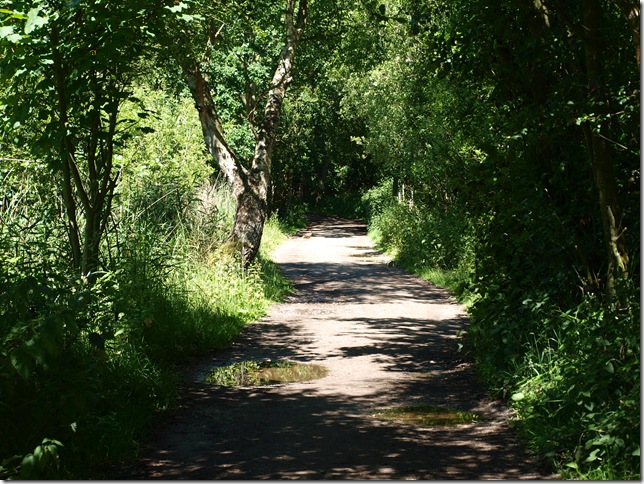 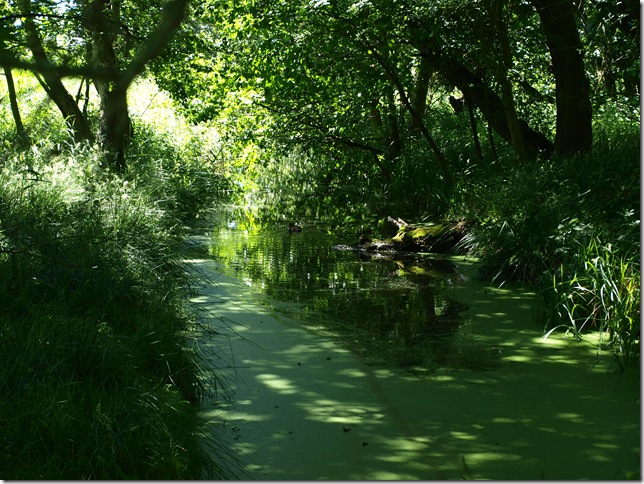 And that’s your lot for this week! Oh, John took the photo’s by the way – not bad are they? If only we knew what we we were looking at…..

Posted by easternsparkle at 18:53 4 comments:

A new take on an afghan for a baby girl, I couldn’t get baby pink so opted for this slightly deeper pink instead. It will shortly be off for a new life with a friend of the friend that I call Julie – hope she likes it! 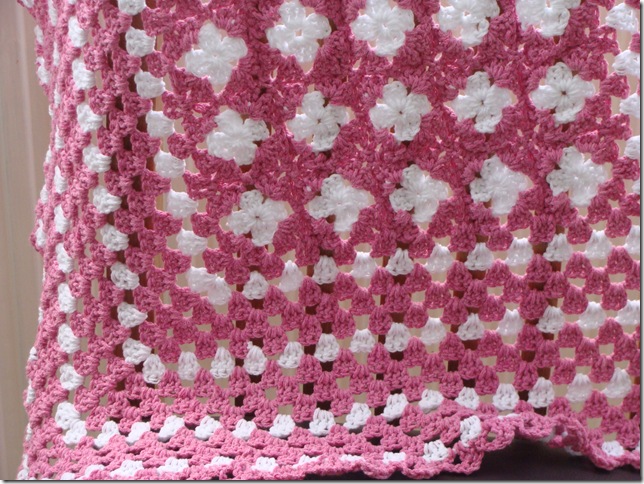 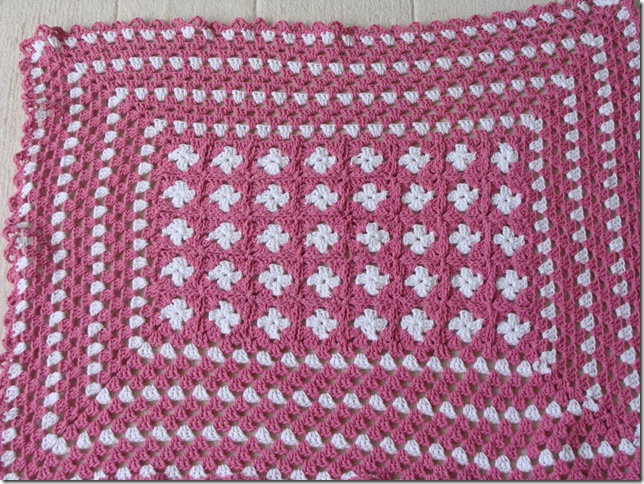 I’ve set up a Flickr page as well – although a lot of the pics will appear on here, I’ll add some of John’s creations as well! It’s here if you want to take a look! Although I think that just takes you to the Flickr home page – anyway, I’m easternsparkle on there as well!!

Posted by easternsparkle at 11:42 2 comments:

It’s been a while again I know but time just seems to disappear from my grasp these days. I’ve been up to all sorts since I last wrote but the big thing is that we had a lovely long weekend away in Scarborough. You may wonder why Scarborough. Well, call me sentimental but it was the first place that John & I went for a holiday some 28 years ago! We’d been up to stay with his parents in Northumberland and stopped off in Scarborough on the way home. Needless to say things have changed over the years and parts of the town were very run down and neglected, almost to the point of shabbiness which was rather sad. We stayed in a small, privately run hotel – The Wharncliffe which was very homely and welcoming. We had a beautiful view across the North Bay and it was lovely to watch the sun rise and set across the sea. I’m not a big breakfast eater but John loves a ‘full English’ if we’re away – you can see why they won awards for their cooked breakfast, each one fresh cooked to order and to perfection.

Using Scarborough as our base we travelled around for the three days we spent there – Whitby, Filey & Pickering (for the railway). Of course before we set off I researched casually looked for fabric supplies (you knew I would didn’t you!) and saw a tiny reference to a shop in Whitby – Judith’s. I can’t give you a link because she doesn’t have a web site. I have never seen so much fabric in such a small space in my life. It was stacked floor to ceiling. All colours. All patterns. All plains. I needed to buy some fabric to bind & back the quilt that I haven’t shown you yet and when I went to pay she didn’t take cards, only cash or cheque, so I trundled to the nearest cash point and drew out far too much to pay for what I’d already ordered so then proceeded to look for more when I got back to the shop! There was another couple in there at the same time, who believe it or not were from Felixstowe at some time and knew Quilters Haven at Wickham Market!! Small world, anyway I’m rambling, the husband commented that his wife buys fabric and never uses it!! She admitted that she is out too often to make things! I have to say that, although I buy far more than I use, that made me feel better! 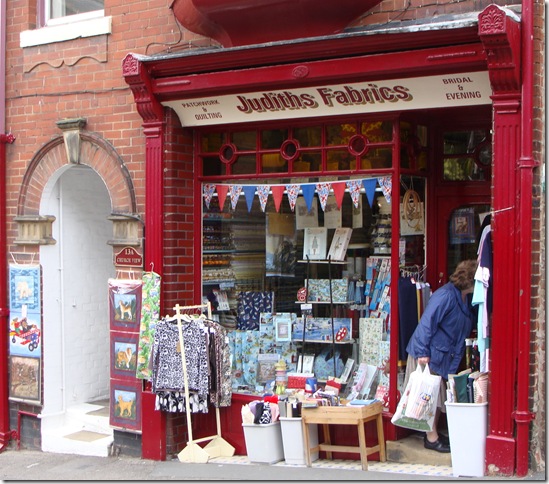 So we wandered around Whitby taking photographs of the same things so that we could compare the results between the two cameras (which I have yet to do!). 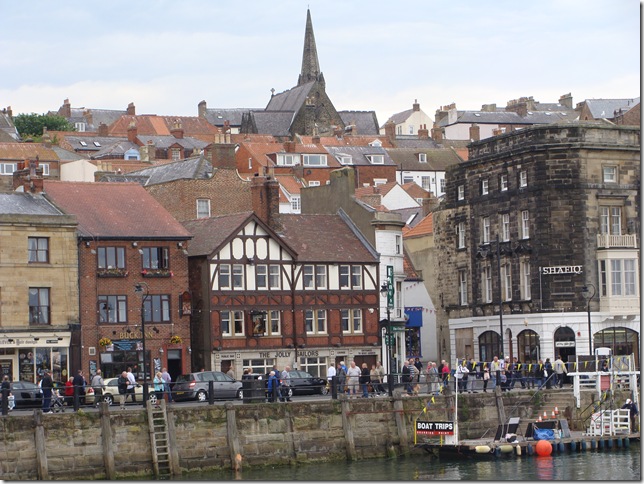 On Sunday morning we woke to a beautiful sunny day, blue skies, no clouds. We decided to explore Scarborough and set of to walk round to the South Bay where John had identified a couple of caches (I like to play fair and let him have his chance to play as well

) but sadly the blue didn’t last. By midday the clouds blew in in and the temperature dropped, we bought rolls for lunch and sat out on a bench outside the hotel to eat them and nearly got blown away! As the weather had changed we set off to Filey in the car but by the time we got there it was absolutely pouring down and we parked up and sat in the car watching  the waves crash in. I crocheted and John snoozed – a real Darby and Joan moment! It stopped raining long enough for John to take some photos of brave souls paragliding (I think that’s what it’s called – they had parachute things on boards in the sea – or is it parasurfing?) We rounded the day off with delicious Fish & Chips in the sort of restaurant that your parents took you to when you were a child and that you vowed never to go to yourself. 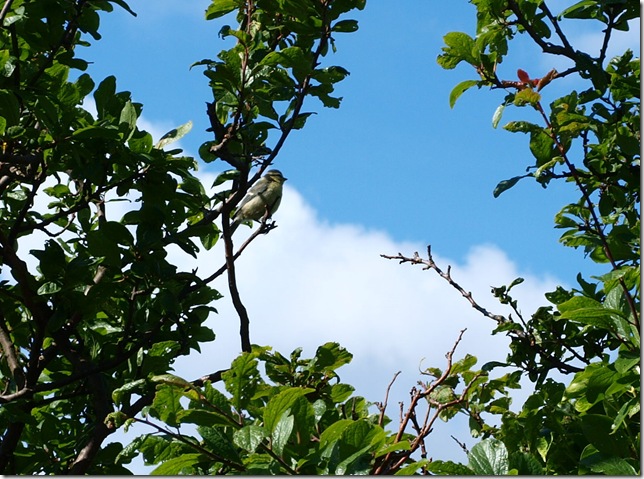 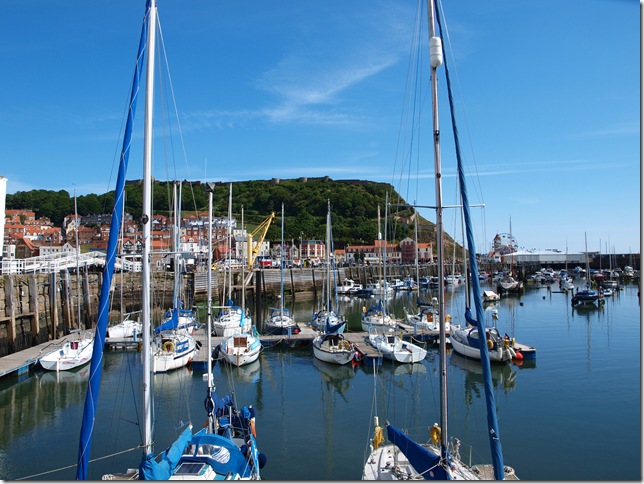 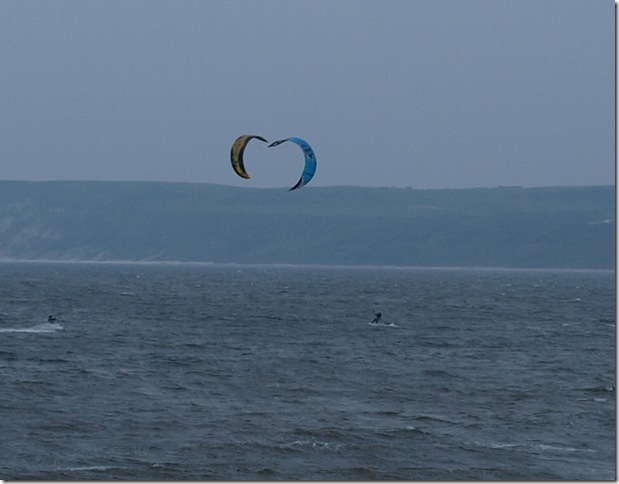 Monday promised better weather and we headed off to Pickering to go for a ride on the North Yorks Moors Railway. We‘re not train people generally but took the opportunity for more photography along the way – John ended up with loads of tiny flecks of coal in in his hair from hanging out of the windows to take the photos! There wasn’t much to see and nowhere to buy fabric on this trip but as part of my research I had found this shop before I went. Well, Judith’s was amazing but this place was something else. On line the fabric is £6 per metre – in the shop it was £4.80!! £4.80. I know. Cheap. The only problem I had was that there was too much choice. I only spent £30 in there, they only sold full metres which is OK – after all it will get used, won’t it? I bought some lovely mauve-y fabrics for a bag – I reckon there’s enough for at least two plus some smaller bags, I won’t bore you with the other stuff just yet – there’s plenty of time for that! 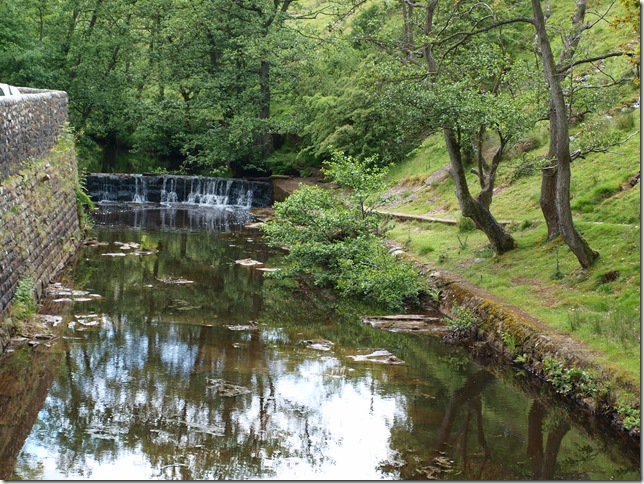 So home on Tuesday via York – and the Cath Kidston shop and Betty’s tearoom (you should have seen the queue outside ‘big’ Betty’s but fortunately we’d spotted a smaller version around the corner and went there) where we had coffee and sandwiches. We were expecting something special but you should have seen John’s face when the sandwiches arrived – they were tiny little triangles with the crust cut off. 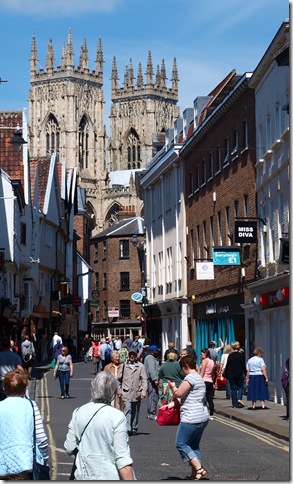 So we headed home, exhausted after our relaxing break and ready to re-join the fray of everyday life. John went back to work on Wednesday but I’ve had the rest of the week off, spent all day Wednesday baking and all day yesterday feeling bleurgh and tired  - it’s early today but I hope it’s better than yesterday!

Posted by easternsparkle at 08:30 2 comments: