Finally I can reveal....

What I was working on for so long! This is the first time I have made a quilt for somebody else, normally I make them and they sit in the cupboard!

I started this quilt last summer and got a bit frustrated with it, I'd bought it as a kit and have to be honest, it wasn't the best quality cotton I've worked with since I started quilting. It got put away but I knew I wanted to give it to Amanda for her 21st birthday. So in March I made a determined effort to persevere and finish it. I had to tweak the pattern a bit because the original instructions meant the diamonds weren't central, which was a bit strange. But finish it I did and with trepidation took it off to be long arm quilted. After all, I'm new to this, I wasn't sure if it would be good enough, what Janette would think about it, would she be able to work with it? Anyway my fears were unfounded and I was really pleased with the result.

I duly took took it home and bound it and can honestly say I'm so pleased with the result. I managed to keep it a secret from her - was caught out only on one occasion when they came round unexpectedly and I had to run upstairs to hide it. They were in Las Vegas for her birthday and only came home yesterday, so I'd waited so long to give it to her.

When I it home from work she was asleep on the sofa curled up under my first quilt so we woke her up to give her her present - I think she liked it! 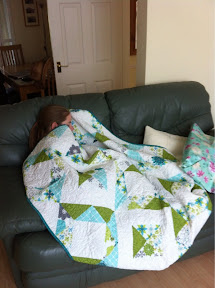 She went straight back to sleep under it!

Thankfully she also found out yesterday that she has a job as a radiographer following completion of her degree course, we're all very pleased for her!

Anyway, here's a few more pictures of said quilt - posting this from the iPad doesn't give me quite the flexibility with the photos so I hope you can see them properly! 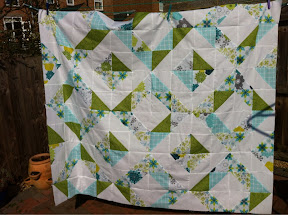 Before it was quilted 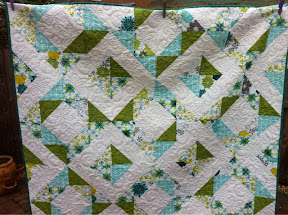 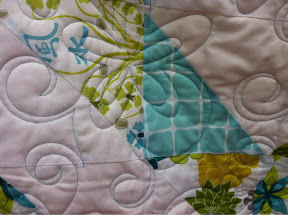 We opted for a blue thread and a swirly, Spirograph type pattern which really lifted the white. 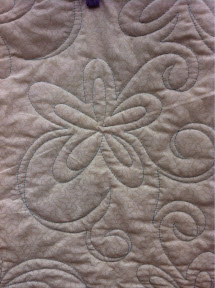 A Moda cream for the backing! 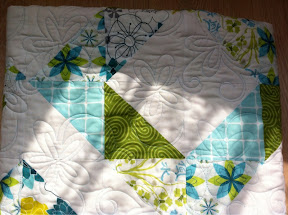 A rare ray of sunshine!

That's all! For the first time since I started, I have nothing in progress - apart from the quilt I'm collecting tomorrow that I'll bind over the weekend - I need to get going again!

I can't work out how to link to Janette on here, but she works as J Quilts, in East Bergholt - give her a look on Google!


Posted using BlogPress from my iPad